In: Portraits
Her way to become the queen of hearts of Africa 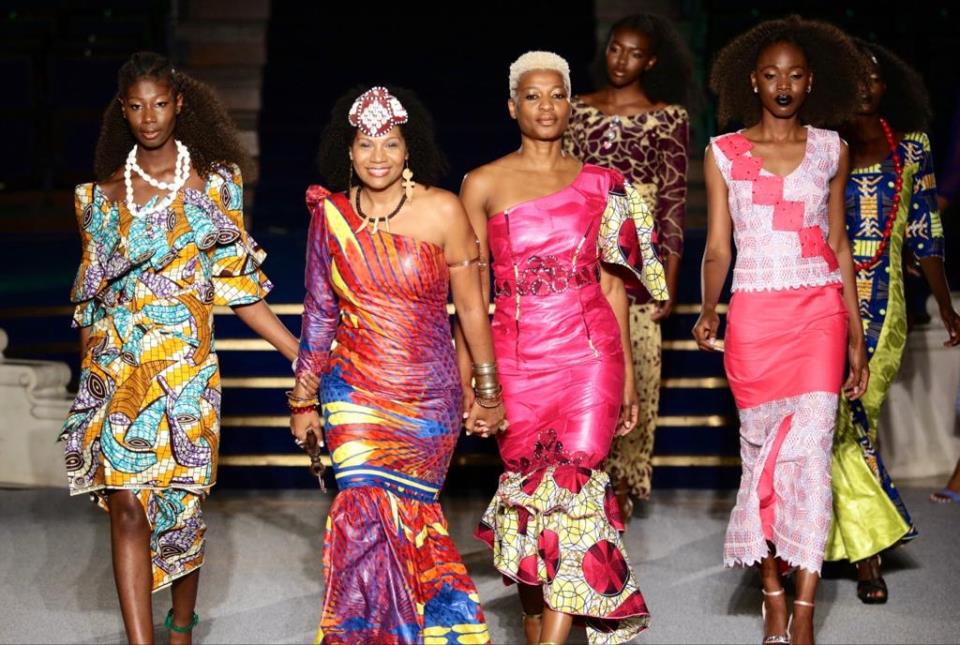 Against this worldwide backdrop, we meet Queen Diambi Kabatusuila of the Bakwa Luntu People of Central Kasaï in the Democratic Republic of Congo, hereinafter referred to as Queen Diambi, for one of her rare interviews right in the middle of Davos.

She is a very impressive personality, very open, in the best of moods, with lots of charisma and a convincing appearance. In a typical African attire, she welcomes us with her scepter, the royal staff of office, expression of her title and position.

First she explains where she comes from. She says: “I am Queen of the Bakwa Luntu, who are part of the Luba People of Kasaï, one of the largest ethic groups in Africa. The Luba are estimated to be 15 million in DRC but are also in other countries such as Angola, Zambia and Tanzania. The Luntu People are about 1.5 million people in Central Kasaï but could be around 3 million worldwide”. As queen sitting on an ancestral throne of her forefathers, she represents the history and legacy of a traditional African heritage. In the global context she wants to represent Africa with a different kind of voice.

For Queen Diambi, the history of ancient Africa is important and needs to be studied and shared so that Africa can really be portrayed and understood in a more accurate and meaningful way today unlike how Africa is currently shown to be like by the western industrial nations.

What drives her is to be able to help highlight the important values that African People really hold dear. Most Africans want to be recognized in their true core values; respect of all life, dignity, solidarity, compassion, generosity, hospitality, etc. One of the primordial values is the reverence for the life-force that permeates everything that exist. The celebration of that force is expressed through the love of all artistic expressions, colorful fashion, excellence in craftsmanship and jewelry design, love of music and vibration, exquisite and diverse cuisine and so much more. The traditions not only hold the history of her people but also conserve the wisdom and knowledge accumulated over thousands of years. Among such precious legacy we can count many natural healers who are very familiar with the healing power of countless plants of her region.

For her tribe, the Queen is the Mother of Africa, who honours values, upholds traditions and listens to and supports her people. Almost 4 years ago she was crowned in Dimbelenge and her life has changed completely. Diambi means that she is the one that brings good news to the people and is the one who can tell beautiful stories to entertain and bring forth laughter.

Queen Diambi grew up in Kinshasa until the time when her parents had to flee from the Mobutu regime in the 80’s. Her father was a diplomat, an ambassador, he had no difficulty adapting to living in the western world since much of the legacy of the Belgian colonization in which he was born and grew up was to emulate the western values and lifestyle, which is something that still holds ground today in a modern post colonial Africa while on the other hand clinging to traditions and authentic way of life was greatly discouraged and frowned upon.

Queen Diambi says: “My father never told me or my siblings before we were already in our forties that we were of royal origin. Because my mother is a white Belgian I grew up in two worlds, one was “wonderful” white, the other the “ugly” black.

She proceeds in saying: “From now on we lived in Europe and only now I started to discover my true love for Africa as I was missing my life in Kinshasa more and more as the years spent in Europe kept me away from home. Life in Africa was characterized by a very special spirit of community, of solidarity, neighborhood, mutual help, and we did everything together. It was very different in Europe. The people were less helpful and more individualistic and materialist. Of course I suffered because the daily temperatures were much colder, for a while I had a hard time finding my place and I felt alone, I wanted to go back home.

In school I was teased because of the color of my skin or the texture of my hair. Thank God I had enough self-confidence to deal with it well, and with time the first friendships were made and I learn to appreciate my life in Belgium and enjoy the cultural differences.

After my high school education, I went to America, where I began to study the 5000-year-old history of the continent of Africa. Initially I had no idea about how rich and prosperous the history of the African continent was but I quickly learned as I had access to tons of black history books and in my early 20’s I attended seminars and lectures by renowned speakers, where I learned a lot about an Africa I had absolutely no knowledge of even though I had spent most of my life there because the information about our history were not made available to everyone and certainly not in schools.

Later, I moved back to Europe to be close to my family, I got married and I had two sons. Only few years after my return, my parents left Belgium and went back to the Congo. Eleven years after living with my family in Belgium, we left and relocated in the USA.

Another 12 years passed without seeing my father, who was now living with his family in the D.R. Congo. For me my father was always my anchor to Africa. When I visited him in 2016, I wanted to see where he was born, where my roots were. I asked myself many question about my own identity? I wanted to know about the homeland of my people and What it really meant to be a luba? What was it like in Kasaï?

As I arrived in Kananga and then my territory of Dimbelenge, I fell in love with this wonderful country again, with her great energy, with her admirable the people. We celebrated our family reunion for many days, singing and dancing. As Only few months before my visit to Kasaï that year, my father shared for the first time the reason why he gave me my name, the name of my great grandmother –Diambi, we drove to her birthplace. What happened there is still indescribable, absolutely unexpected for me and changed my life completely.

As they had patiently waited People were very happy to see me for the first time , after many embraces, laughter and a copious meal with the entire community, the Elders and the Chief asked me if I was now ready to take responsibility for my people. I spontaneously said yes, without knowing exactly what this meant.

Everyone around me cheered and applauded. They gave me a rooster, the symbol of leadership and the crown of my People was placed on my head. From that moment on I was the Queen Diambi.

Africa is my love, my great passion, my home. I use my voice to promote Africa in its true values.

For this reason, I also work together with the Voice Aid Association e.V., which campaigns worldwide for humanity and protection of the planet.

Together with Astrid Arens, President of Voice Aid, and Regino Hawich, vice-chairman, we are planning peace concerts for Africa, thus bringing the true history of Africa closer to the people across the world because the history of Africa and the ancestral heritage of Africa belong to Humanity. The song “We Are One” plays a central role in this project.”

Queen Diambi’s dream is to help bridge the divides among African across the planet to reunite Africa and participate in bringing the vision of Africa as a safe haven for all. She believes that it is crucial for the benefit of our planet to restore balance and encourage the African People to stand together, hold together and support each other to demonstrate that the core values of their culture can be a vector for peace and prosperity for all and that they can live with the great diversity in harmony in Africa, with the people of the world and with the environment of our planet Earth.

All photos are from private archives