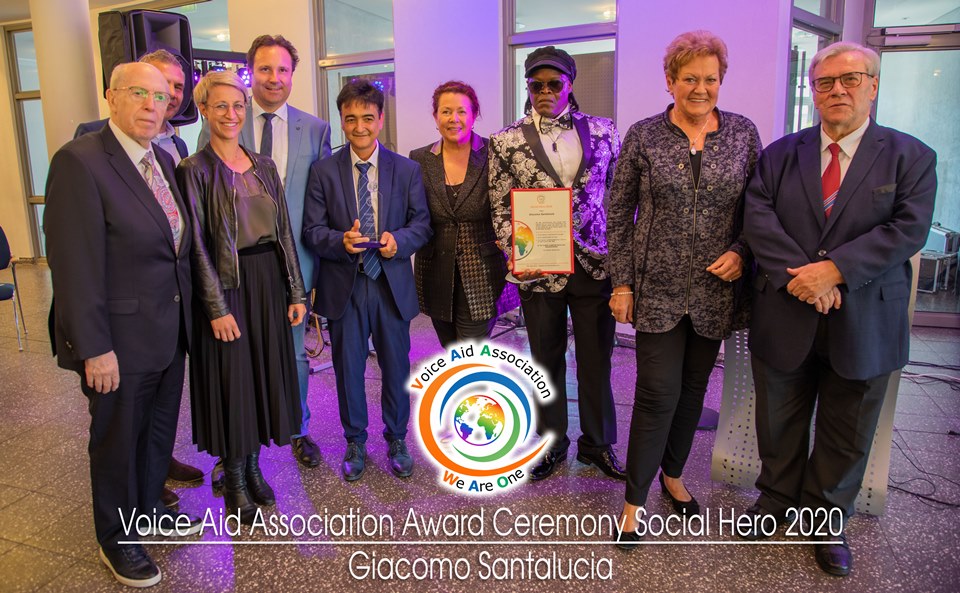 On 23.09.2021, Voice Aid Association e. V. together with Mayor Andreas Feld invited to a special event in Eppelborn. In the premises of the Big Eppel, Voice Aid President Astrid Arens presented the Social Hero Award 2020 to Giacomo Santalucia from Saarland. A special award for a very dedicated person. The president of Voice Aid Association e. V. led through the day with an emotional moderation and got the audience in the mood for the award ceremony.

In the presence of the deputy chairwoman of the CDU/CSU parliamentary group Nadine Schön, the Minister of Health Monika Bachmann, the mayor Andreas Feld and other guests of honor, Voice Aid President Astrid Arens presented the Social Hero Award to the lively Italian.

Poignant moments in the Big Eppel

Adriana Vita opened the event with a highly emotional song.

Mayor Andreas Feld then welcomed all the guests as the host and gave us the first small insights into the life of the award winner.

Voice Aid Association President Astrid Arens tuned in the attending guests with a few words about her organization.

The Voice Aid Association is a worldwide association of people who, on the basis of the Charter of the United Nations (UN), with their music and their ambassadors & friends, are enthusiastically committed to more humanity, environmental protection and the protection of our planet. It is time that all people, no matter what nation and origin, are aware that there is only this one earth and that one should show tireless and immediate commitment, especially regarding sustainability, reported Astrid Arens during her moderation.

“We are a modern and cosmopolitan non-profit organization of the new generation, which uses the electronic means of communication to build its charitable network,” the Voice Aid chairwoman explained to the attending guests.

Astrid Arens deliberately left it to Reiner Calmund as laudator to honor the career and activities of Giacomo Santalucia with some personal words. He reported on some special shared experiences with Giacomo, who inspired him with his bright and creative nature. Reiner Calmund (former German soccer official) reminded the guests with his words that Giacomo Santalucia had created the Werner Zimmer Peace Chain, which is now five kilometers long.

In addition to German Foreign Minister Heiko Maas and German Defense Minister Annegret Kramp-Karrenbauer, numerous celebrities from the worlds of culture, business, sports and the media took part in the campaign.

Calmund ended his speech with “It’s his unique way of getting things going out of nothing, his way of convincing and standing up for others that makes him special.”

A special award for a unique person

Voice Aid Association President Astrid Arens and Vice President James Williams, together with Mrs. Monika Bachmann, Minister of Social Affairs, Health, Women and Family, presented the Social Hero Award. While presenting the award to Santalucia, Astrid Arens reiterated with emphasis that it takes such unique and special people like Giacomo Santalucia to make the world a better place. She explained that Giacomo actively lives sustainability and is thus a role model for many people.d für viele Menschen sei.

The award ceremony was musically accompanied by the powerful-voiced singer Adriana Vita and the soprano Elisa Wehrle. Their songs hit the guests right in the heart and really heated up the atmosphere on site. After presenting the award, James Williams paid tribute to the likeable Italian from Eppelborn with a version of “My Way” by Frank Sinatra specially tailored for him.

In his emotional speech, Giacomo Santalucia thanked his fellows, the Voice Aid Association, his parents, the laudators and the numerous friends present for coming. He promised to continue actively making the world a better place.