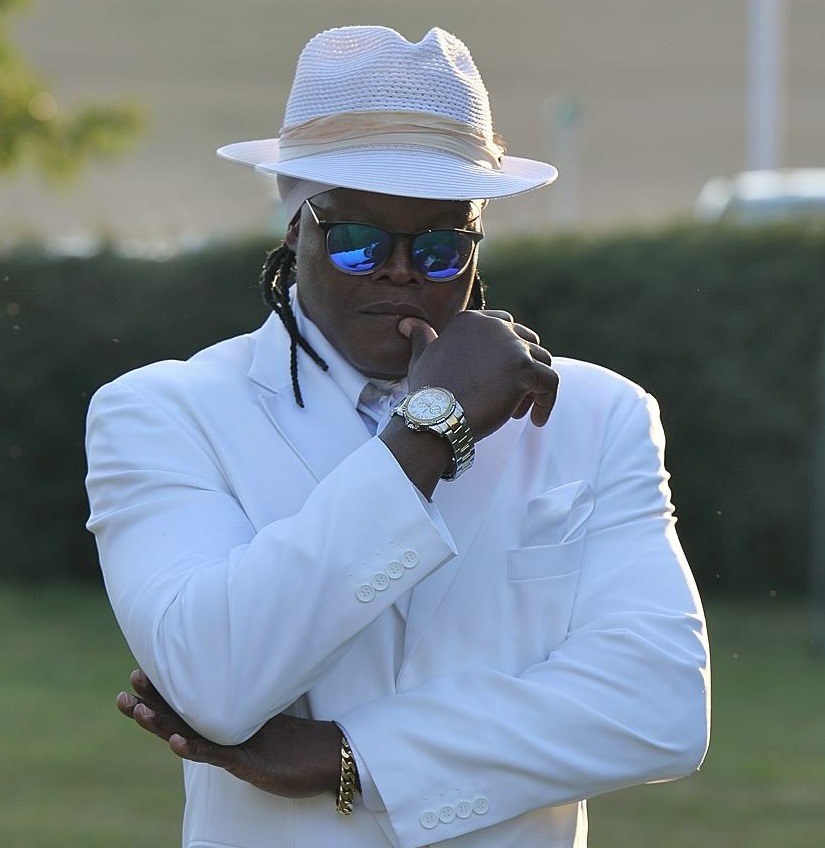 – Doing good is his passion –

When you think about the finest „Black Music“ here in Germany, the first thing that comes to mind is James Williams and his band „All That“. Since 1997 „All That“ is one of the leading Black Music bands in Germany. Their music ranges from gospel, R&B, soul, reggae, rap, hip hop and blues to Sinatra classics.

James and his band are at home everywhere and have already inspired people around the world with their feeling for black music. They are celebrity magnets, show stars and real artists. This cult band knows how to bring the audience to the boil perfectly. Depending on the engagement or task, the 4-piece band grows up to 29 band members, like at the cinema for peace.

When they perform, you’re close to celebrities and a lot of good mood. Thomas Gottschalk already paid tribute to them, Victoria Beckham danced to their music, Franz Beckenbauer cheered, Tom Cruise asked for an autograph, Prince Albert of Monaco was thrilled and Sepp Blattner wanted a photo as a souvenir.

He has been working with Dr. Hermann Bühlbecker for many years. He travels internationally, is at home in Hollywood and trusts in his music feeling. Williams is networked worldwide and supports the annual Lambertz Monday Night, the world’s sweetest party.

But who is James Williams, who has worked with music greats like The Temptations, Smokie, Usher, Die Prinzen and Boy George – to name but a few?

He was born in the USA and comes from an artistic family. James Williams (61) has been living in Germany since the age of 18, has his main residence here, lives in Idar-Oberstein and commutes between the USA and Germany. The former basketball professional is still an enthusiastic sportsman. He likes boxing, running and training in the gym.

But his first great love is music. This passion determines his life and inspires him.

James Williams travels a lot in the world. Although he was born in the USA, he prefers Germany as his adopted country.

When asked what he likes about Germany, he answers: „I am very proud to live here. Germany has a very interesting culture and history. Many Germans have forgotten how beautiful, how wonderful this country is and what it has to offer. Anyway, I prefer to live in Germany. I like to go to the USA to visit friends and make music. But my love belongs to Germany and my music.“

In late summer 2018 Astrid Arens – The Voice, internat. speaker & business expert, asked him about the idea of founding a charity organization, the Voice Aid Association, to conquer the world with music and to inspire people for more humanity and environmental protection. Said done – he said yes directly and became vice-chairman of the Voice Aid Association, alongside Regino Hawich – vice-chairman, Michelle Marie Shockly – cashier and Astrid Arens – chairwoman.

He is Head of Music at Voice Aid and despite his worldwide success James has remained a very down-to-earth guy. Always interested in life with an open ear for his friends.

“We’re always glad to make people happy with our music.”

That is his message, which fills him and which he lives 150% of the time.

A very special person, an exceptional talent, a thoroughbred musician, a cosmopolitan who unites Germany and the USA in a special way. He lives a relationship and is proud of his German-American origins.

Voice Aid Association – for the sake of mankind and the planet