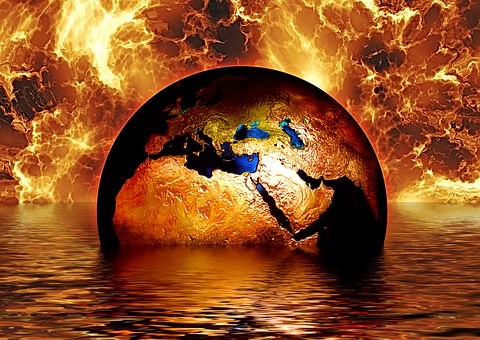 „Get off that horse when you see it’s dying under you.“
(Lakota wisdom)

„Nothing happens in living nature that is not connected to the whole.“ (Johann Wolfgang von Goethe)

As different as the two quotations and the cultural background of the quotations are, they have one thing in common: it is time to act.

Man-made climate change affects us all. We have always seen ourselves as the “Lord of creation” who has the right to subdue and make nature subservient and to see ourselves less as part of the earth.

Since the beginning of industrialization, the temperature on earth has risen by an average of one degree Celsius. Once emitted, carbon dioxide remains in the atmosphere for centuries to millennia. A physical truth that can be proven. If the most important driver, the industrial greenhouse gases CO², which are produced by the massive burning of fossil fuels such as coal and oil, are drastically reduced, we will prevent the increase in extreme weather events worldwide. As the polar caps melt, sea levels rise. Each 1 degree warming by two and a half meters worldwide. In some regions this leads to more frequent extreme weather events such as storms, forest fires, floods and increasing precipitation, while elsewhere droughts and extreme heat waves prevail or fields wither. The number of climate refugees who lose their homes as a result of natural disasters is rising.

Human life and especially that in an industrial civilization like ours is only possible within very narrow temperature limits. As soon as the average temperature goes down only a few degrees, our life would resemble that of the Inuit in the Arctic ice, vice versa, and we travel in search of oases with camels through stone deserts.

If we continue to live like this, even temperature increases of up to nine degrees Celsius are possible until 2080, according to climate researchers at the UN Environment Conference in March 2019. If eight million tons of plastic continue to enter the oceans every year, then in 35 years more plastic waste will swim than fish in the sea.

How fragile our climate and our planet really are is illustrated in the New York Times bestseller “Our Amazing Planet Earth” in a unique way.

If we pull the emergency brake now, climate change will continue, but the worst consequences can be prevented. By losing the natural basis for life, we are destroying the economic prosperity of future generations worldwide. Doing nothing is more expensive than acting.

What individuals should do to protect the climate

No other topic, however, has taken individual responsibility as much as environmental protection. Whether it is global warming, traffic collapse or plastic waste, the climate question has been broken down into the individual’s actions for years: We have to pay attention to the working conditions in the production of our clothes, we have to eat more environmentally friendly, animal friendly and organic food and above all eat less meat, waste less food overall, drive less cars and often (and cheaply) fly and and and…
The tips go so far that I as a consumer should pay attention to a correct tyre pressure so that gasoline and greenhouse gases are saved. If the tyre pressure is 0.5 bar too low, consumption increases by five percent…

Can the turnaround still succeed?

Unfortunately, it will be less enough if we are repeatedly suggested that we simply have to pull ourselves together, that we have to do without, consume less and produce less greenhouse gases.

Not only 100 percent of the world’s population that is willing to do so is needed, but also a political and economic system that does not get lost in the respective egoisms. In India, China, the USA and Brazil – worldwide – a rethink is also necessary. It is a global problem that only the community of states can solve and must not be abandoned to the individual. In the end, it should and must be international laws that regulate this. There is no way around that. I would like to be able to rely on the elected institutions and parties to resolve the issues of our time, rather than gamble away people’s confidence in dealing with climate change.

In 1997, the international community agreed on binding targets and measures for climate protection with the Kyoto Protocol. At the 2015 United Nations Conference on Climate Change in Paris, binding regulations were agreed for the first time to limit global warming to well below two degrees Celsius compared with pre-industrial levels.

Unfortunately, we are a long way from achieving all our goals. In Germany alone, the energy turnaround is hampered. The climate protection targets set for greenhouse gas emissions will be less achieved with the current measures by 2020, neither renewable energies nor grid expansion are making progress, energy-efficient building refurbishment is still in its infancy, CO² emissions have risen since 1990 and electric cars are far away from any noteworthy registration figures.

How do we want to live?

Since our children have taken to the streets for a better world, like Greta Thunberg, the 16-year-old Swedish student activist, with ‘FridayForFuture’, climate change has once again become the focus of public attention.

The longing to shape their own future is also driving those who are now demanding more climate protection by the thousands. An enlightened society, whose central pillars are critical reason and science, faces the failure of politics. A policy that acts against secure knowledge, against all reason, which, when it becomes concrete and drastic, always pinches.

For a long time now, experts have been developing detailed concepts for renewable energies that can generate electricity in an almost climate-neutral way. There are also technical solutions for transport, buildings and agriculture. Politics and business only have to get them out of the drawer and implement them – and carbon dioxide should get a price tag!

We only have one world. But if we continue to live like this, we need three worlds.